Disaster Relief–The citizens of Second Life Come together as one

Early on Saturday, I knew I was DJing later,  I Decided what I made in tips I would donate to the Red Cross Via the Linden Lab Red Cross Bears so I promptly Posted a event – According to TOS only 1…. Unlike some people in Loon or Vice Beach (Sighs – a Whole different Blog).  I logged in and knew Fashion for Life had started so I jumped to that sim in hopes, well to spend a few L, Don’t we all.  I did, My purchases Included Boots from L&B and a beautiful antique wedding dress just for shits n grins and I actually ran across a store I had been to a long time ago with a dress I had purchased, I loved that dress and it had gotten buried in my amazing maze of an Inventory.

I was 20 minutes early to DJ, tossed out my contest board and donated 200L with just Thank you for coming on it, No contest – Just join and maybe u will get it.  Then Trivia ball and donated my own L again to keep people busy and finally my tip jar.  Stream was not so easy, I forgot to pay and Yes, Shooting off to the place it was to late, Great time to up my Users since I was forced to get a new stream regardless. Encoding my stream should have been simple, But I had not had to do so in a year – Needless to say I was a Few minutes late starting till I could verify it was working properly.

The Pixel Bean – It is usually hopping there, a lot of people come and all are very friendly and they LOVE trivia, Regardless I did not have high expectations for the evening I was going to be happy with whatever I got and send out the teddy bears to the people that came as the tips came in.  This was feasible as 100L poured in here and there, 300L bears were bought and sent to those that were in the crowd.  Aeonix Aeon showed up later and mentioned (you have a great  crowd tonight) I mentioned what I was doing to him, as I was saying on mic also and he started to kicking it up a notch. 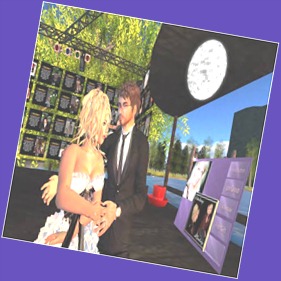 Me and Aeonix @ the Pixel Bean

I was at 2K when someone… Names will remain As Letters (Ha ha Love Ya S) mentioned I had a great Phone sex voice, I of course missed this till I saw the thread of other’s agreeing, I looked and cracked up and said I was the great pretender after a few people begged me to moan on mic.  I jokingly said on if we get to 5K Ill Moan for you guys, well this took all of 5 minutes, I was shocked to say the least…..I was actually moaning on mic and they Kept tipping another 2K. Out of my Vodka filled thoughts, 10K sounded great,  and they wanted more. I offered up the Big “O” for charity at 10K.  Keep in mind, I have my Partner in IM saying “Go for it, It’s for charity”.  10K never came so quickly (No Pun intended). At this Point the trivia ball was second hand to those trying to dig up donations to add to my tip board, One person (Smirks) Was tipping between 1 and 20 L at a time every 30 or so Seconds so I would say their name on Mic. knowing I would do so every time I was tipped. 10K was  quickly turned into 16K.

From there a 14K Donation hit my board, I had to double check as I was about to say 1400… I of course thanked then in the only way I could worth their while since they had started this whole Fiasco of my “Fantastic” Sex voice, They IM’d me and Thanked me profusely, not just for the R-Rated Thank you but for Donating my time and own Linden to help out such a good cause. At the end of the evening, I was on Hour 3 of DJing and it was getting  pretty late,  I wrapped Up the evening trying to send out a few more 3K teddy bears (the 300 L ones no longer applied with 22K more to spend) and today again, I will Pilfer thru looking for failed deliveries and resend out as I want to make sure that every Linden goes to the red cross. In the end I had $120 Dollars to give to the Red Cross, Much more than I could have ever done on my own being recently laid off.

I feel blessed to have the talent I do to DJ, I am by far means NOT the best, But I have fun which makes it easy for others to share in that fun.  I had only hopes to donate maybe 10 or 20 dollars. I was amazed at the donations that were being tossed at me, and I WILL be sending bears out till every Linden has been accounted for.  I want to say THANK YOU to Pixel Bean Coffee House for giving me the chance to make a difference and also a Huge THANK YOU to those that attended and made that difference Possible.  The Pixel Bean has been my Saturday night for a while now and I love everyone that I have met, the crowd there is always fun and full of laughter, and apparently Linden when I moan on microphone. I looked at the red Cross website and Found this.

So In all We Provided 1 Doctors Visit and Approximately 10 Blankets to Victims, and I always say, If you can make a difference in just one persons life, You have accomplished much more than just donating.

If you Ever get the chance,  Stop by any day, they will most certainly welcome you at the Pixel Bean Coffee House I am honored to be there and everyone there should be proud to belong to such a wonderful and generous group of people from all over the world. Hugs! This is the Moaning DJ Signing  out, 3,2,1 and Stream has been Changed. [Insert another song here]

Posted by Someone Special at 3/14/2011 No comments: Links to this post

Cover of a Whole New World


If you have never heard him sing, and EVER have the chance to In Secondlife Christion Dinzeo is the best... Melts Me

Posted by Someone Special at 3/03/2011 No comments: Links to this post