In a world full of angels and demons, Sometimes there is a shift in goodness, and the Demons  make their way, one by one, creeping into every corner of your soul, they inhabit your thoughts your dreams and your desires, It is then, you will appreciate “Forsaken City”.  It is a Role Play Sim for the Urban Neko, Vampire, Grunge patrons of Secondlife. Nice thing, You do not have to be all or any of those things to RP there, I was, Well a Neko that particular day,and was hunting for a place to do some Grunge/Neko Pictures.

When I landed there, I was given some Information as to where I was and where the RP areas were.  I know some RP Sims and harsh, if I was to just so much as  land there I would be bombarded with IMs, taunting, teasing and pulling me into their storyline. I decided to check out the OOC area (out of character) and found a small city block, with a bus stop, dilapidated car, Bag lady giving away free Kitties (BONUS)  and, well it was definitely fitting for the RP.

I was Impressed with what I had seen and tipped the trash can and then received an IM, "Hey thanks for the Tip”. I tip places ALL the time, Seldom do I get a thank you, Unless it is automated from the tip jar, even if they are standing next to me.  The IM was from Raine  (KenDevil Raine) one of the Owners along with  Dolly Devill and Riley Dark matter. 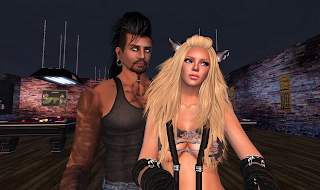 Raine and Me at one of the Local Hangouts


This sim has so many Hidden places, I doubt you would be able to find them all,  I was taking picture after picture, and I could have taken 100 more,  it is so true to life, from the street sighs, to the textures at the sim edges that I admit I walked Into a few times thinking I could. This city has every thing Packed into one sim, so you don’t have to look hard to find another player to RP with, and I found everything from apartments, Gas station, Police station, insane asylum (I felt at home there ha ha ) Highway, Hospital, Huge Skateboard area, Pawn shop, Diner I cannot even remember all the places there, and all were equally as detailed and lots of room for 2 or 20 people to RP in an area.

I spoke to Raine and I got some information from him for those who want to RP there.

Here is the NC Information that you get there as a background to the sim.

a bustling place, full of hard working, honest people. The city was alive, prosperous, and full of energy. Sadly, that was before they came......"they" being the creatures of the night. Some say the whole thing started years ago when the first of the night  walkers made their way to Forsaken City. This night walker fell in love with a mortal and god himself damned the city, allowing a sort of "open door" for the rest of em to come along. What I know for certain is that eventually the Government gave up trying to control the situation and wanting to keep the rest of the human race safe, they cut off all ties with the city. Years later, Forsaken City is still a bustling city (though not so alive and prosperous), with something always going on. The few humans that still walk the city streets have learned to coincide with these beasts, making themselves useful to them (in turn allowing themselves to live long, and sometimes not so healthy lives).

Below is a List of the contacts you can chat to Inworld, I have been Popping by on occasion now that I have made a few great friends there, So if you decide to stop in, Check your Radar, I may be drinking at the club, Or hanging out in one of the Secret areas I was Lucky enough to be shown. I want to say thanks to Raine and Payne for making me feel so welcome, I look forward to seeing you Inworld. 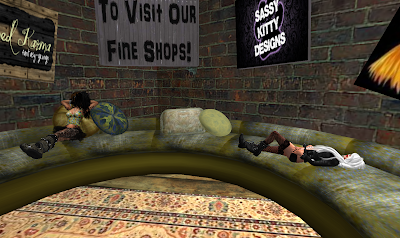 Payne and Riley Hanging out at Club Forsaken 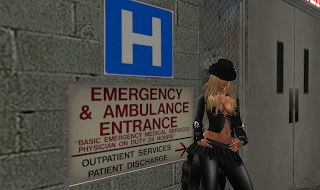